We're incredibly grateful to the Ethereum Foundation for allowing us to continue our exploration of Eth2. The continuance of our grant and the added networking grant for further development of the libp2p stack will make sure that Ethereum 2 is as robust as a world computer running programmable money needs to be. Without furthed ado, let's dive into last fortnight's changes!

From August 12th to August 17th, the Nimbus team had their semi-regular dedicated brainstorming retreat to re-prioritize goals, estimate deliverables, discuss problems and cook up solutions.

Back in April when we launched the original testnet, we created our main TODO issue for tasks that still needed doing until Devcon 5. Many things changed since, so we took the opportunity to clean that list up a bit. Here are some of the decisions: 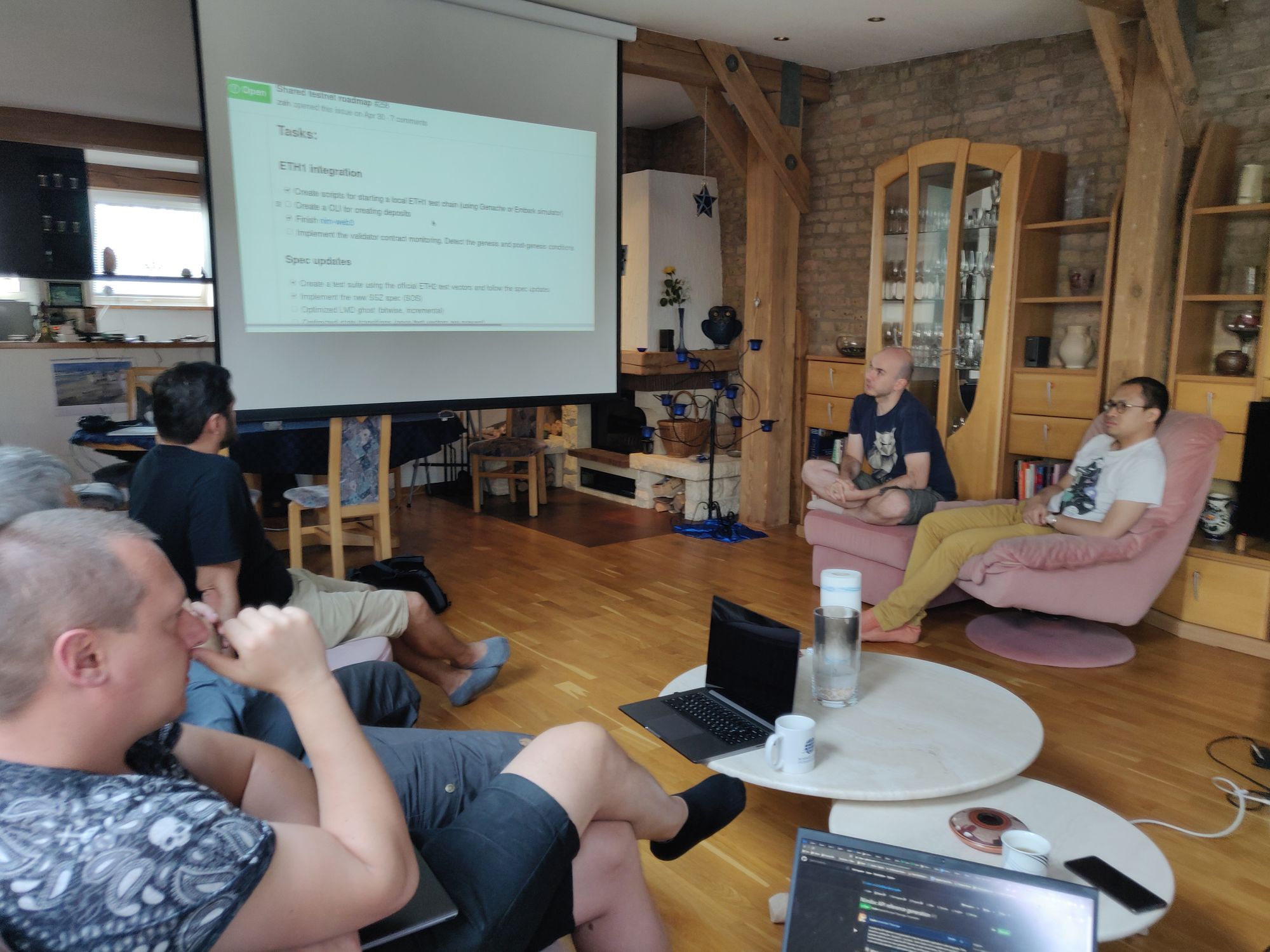 We wrapped the week up with a public video AMA which has since been uploaded to Youtube and can be seen here. Apologies for the potato webcam, next time we'll get a dedicated one! Some of the questions asked and answered:

You may know that Nimbus is our Ethereum 1 implementation in the main Nimbus repo, while the beacon chain aspect of the code is in the appropriately named nim-beacon-chain repo. Up until now, the way to build the Eth2 part of Nimbus was to check out the "main" Nimbus repo and then build the beacon nodes inside the vendors subfolder. We are now moving to an architecture where both Nimbus and Nim Beacon Chain will be top level repos, each with their own build system. Here's how you build Nimbus now (instructions also reflected on our website):

And here's how you build Nim Beacon Chain.

Each of these will build its own version of local Nim, which increases build time when looked at together, but makes things more modular when looked at separately. We feel like this is a more streamlined experience for those only interested in either Eth1 or Eth2, not both at the same time.

We have updated our Libp2p implementation to work on Windows now. You can once again run Nimbus on Windows machines. These changes are not yet in the master branch, so to run them compile the devel branch instead and remember to use testnet1, not testnet0:

But why stop there? Libp2p works just fine standalone, so grab the docs and fire up those examples, then go build your own Libp2p chat app!

Our testnets are running and can be connected to, but we encourage and appreciate experimentation. Thus, we have published a refreshed guide on how to run your own private cross-platform (or cross-VM) testnet.

You can now run a private Ethereum 2 testnet with pre-generated fake validator keys. This will soon be expanded to include Eth1 reading for new deposits, allowing third parties to join your testnet if you open it up.

Resource restricted devices have been our mantra since day 0. These days, our state transition simulation even works in the browser:

I know you've all been dying to do this: run the #eth2 beacon chain state transition from the comfort of your browser - well, the wait is over: https://t.co/4DsGBZYxNm pic.twitter.com/1UJJzo9y9B

You can check out the source of the above in this repo and its origin in this PR.

Now, we're doubling down on that resource restriction promise: we intend to get a beacon node with at least one validator running on a last gen Raspberry Pi. We'll be demonstrating the process of building and running this setup at Devcon 5 in a hands on workshop, so if you can, please join us - bring your Pies and go home with a running alpha Nimbus node!

Our Document Generator is a simple script for generating visually pleasing and mobile-friendly documentation for all the various independent and not necessarily blockchain-related libraries coming out of the Nimbus lab. It's built to be language agnostic, though, so you can use it to generate documentation for your own projects, too. Just follow the DocGen's README instructions. 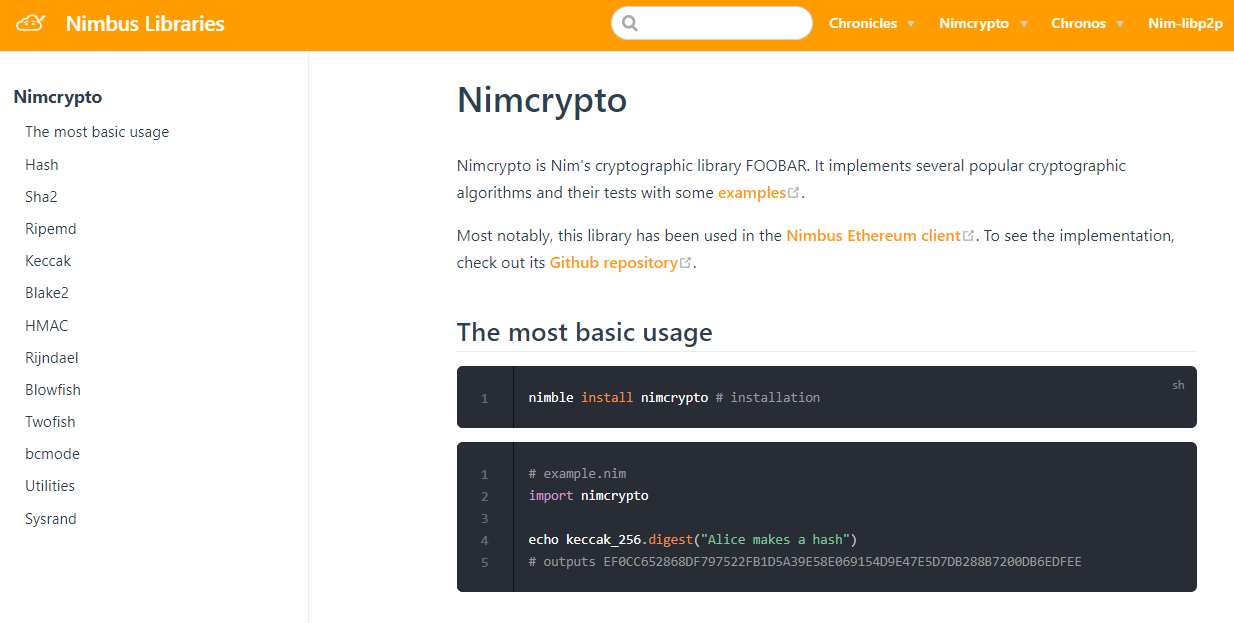 The Nimbus Libs docs generated with this tool now also contain an auto-generated API reference, which lays the foundation for more documented code and more thorough guides - specifically, a separation of tutorials and recipes is coming alongside the current setup of the master overview with an API reference. There are some pending enhancements to the generator that prevent a more widespread deployment right now (most notably, generating docs for modules with multiple main files), so if you're into JavaScript hacking please shoot a PR or two our way once you look at the issues.

The Nimbus Libs docs site is now also being indexed by Algolia and we should have their super-search built in and activated by the time you read this.

Last but not least...

We've had two new members join this month - Andri and Dmitriy. Andri has been contributing via bounties for a long time now and we've finally brought him on board officially - he's responsible for almost all of the Eth1 progress! - while Dmitiry, previously at Mustekala and with significant IPFS experience, demonstrated his essence to the project by virtue of capacity for German beer. Welcome guys!